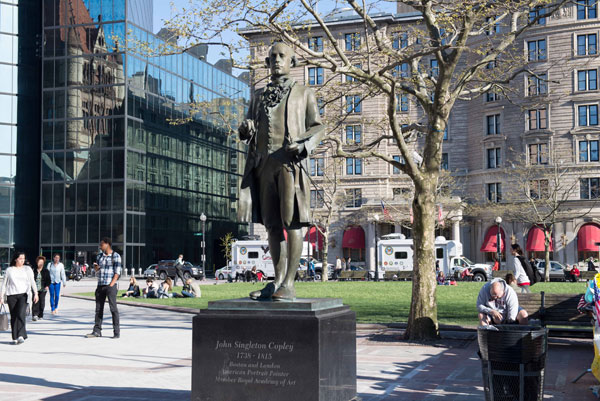 In 1999 Lewis Cohen first presented his preliminary designs for a sculpture of John Singleton Copley to Friends of Copley Square. In 2002 the statue was completed and installed in the Square.

John Singleton Copley was considered to be the finest and most prolific painter of colonial America. He painted portraits and historical subjects with elegance and grace.

Copley was born on Boston’s Long Wharf on July 3, 1738, to tobacco store proprietor Richard Copley and his wife Mary Singleton, immigrants who recently arrived from Ireland. After John’s father passed away, his mother remarried to a Peter Pelham, who was a mezzotint engraver, artist, and schoolteacher. When Peter passed away a couple years later, John decided to help his mother with her financial burdens by applying his burgeoning artistic talents, using the tools Peter Pelham had left behind.

John’s earlier work was influenced by his stepfathers European style. In the mid-1700s the focus on American paintings shifted to portraiture. Portraiture was in great demand in the colonies, sufficient to support a small number of artists. When Copley met Joseph Blackburn in 1755 he was inspired by Blackburns’ use of rococo lightness and coloring. Copley’s portrait of Paul Revere, which now lives in the Museum of Fine Arts, Boston, is an example of his use of rococo and chiaroscuro styling.

In 1766 Copley sent a portrait of his younger brother entitled Boy with a Squirrel to the Society of Arts in London, in hopes of expanding beyond New England. Joshua Reynolds and artist Benjamin West praised this painting and tried to convinced Copley to move to Europe for further training. Before Copley packed up and left, he married Susanna Clarke, the daughter of a Boston Tea Party merchant.

John Copley and Susanna (Sukey) had a happy marriage, raising six children. They lived at the top of the town near American patriot John Hancock at the peak of Beacon Hill. When his commissions began to decrease after the Boston Tea Party Copley listened to his old friends Reynolds and West and departed for Europe. In Europe he got inspired by High Renaissance and 19th-century Romantic Art. In the present day Copley’s work is considered to be an early landmark of romanticized contemporary history paintings.

Copley was elected an associate of the Royal Academy and became a full member in 1779. He continued to produce portraits, but in a freely executed manor. These next few year brought him fame but not wealth. After his health began to decline in 1790 he was burdened with financial hardships that he could not get out of. On August 11, 1815 John Singleton Copley suffered a paralytic stroke during dinner and died just a short four weeks later. He is buried in the Hutchinson tomb at St. John’s Church, Croydon England.

Monday, November 28th, 2022 at 5:00 PM Mayor Wu, Boston Parks and Recreation, and the Friends of Copley Square are planning another great event.