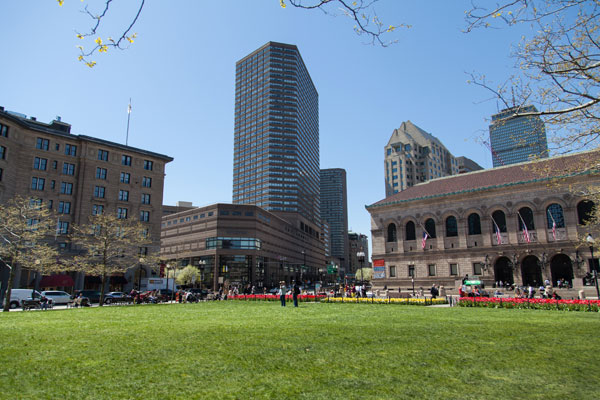 This year marks the 138th anniversary of the naming of Copley Square.

The Creation of Copley Square

The area known as Elysian Fields, was created by the filling of the Back Bay beginning in 1857. The space was the result of the collision of the existing South End street grid and the newly created street grid in Back Bay.

Copley Square’s space was created by the meeting of Huntington and Boylston street at a 45 degree angle, which was a jumble of seven different parcels of land, all which were under different ownership. At this time Copley Square was known as Art Square. This area was a complicated mix of triangles, alleyways and small plots. There was no strict developmental plan, therefore land was bought and sold and structures were build throughout the next 25 years. Finally in 1883 the City of Boston officially designated the spot as Copley Square and spent the next couple years acquiring the final parcels of land that would eventually make up the current day square. If Boston was unable to accomplished this deal, the Square today would be filled with large buildings and shops which would obstruct the view of Trinity Church and the Public Library.

For many years after the Square was renamed, there was much talk about renovation. Huntington Avenue bisected the Square, and proved to by a continuous obstacle for redesign over and over again. It took until 1965 for a change to occur in the Square. Mayor John Collins created a Master Plan of the City of Boston that proposed closing Huntington Avenue. He then conducted a competition for the new design for Copley Square. Out of 183 entries, the design of Sasaki Dawson, DeMay Associates of Watertown, MA was declared the winner.

The winning design included terraced walkways, alleès of trees, benches, and a large cascading pool. This new design enhanced the buildings surrounding the Square and gave them their own unique home. Once the John Hancock Tower and Copley Place was build, the Square was enclosed.

1983 marked the 100th anniversary of the naming of Copley Square. The Copley Square Centennial Committee (CSCC), a non-profit public/private partnership, was responsible for jump-starting the renovation of what we now know as the current day Copley Square. With the initial funding from The National Endowment for the Arts. The CSCC held four public workshops to determine what should be done to improve the Square. With donations from local businesses and many fundraising events, the Square was able to fund a redesign. The winner of the new competition was Dean Abbot of Clarke & Rapuano, Inc. The new design was completed in 1989, and it was given much praise of the new “Greening of Copley Square”.

Monday, November 28th, 2022 at 5:00 PM Mayor Wu, Boston Parks and Recreation, and the Friends of Copley Square are planning another great event.